THE LEFT SHIFT OF NATARAJA 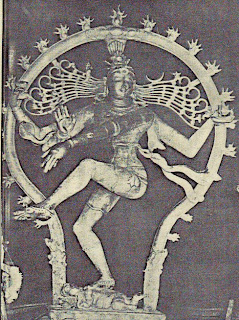 Although the great temple of Madurai is known as Sri Meenakshi Temple, the presiding deity is Thiruvaalavaayudaiyaar or Sundaresvarar; otherwise known as ChokkEsvarar, Chokkalingam, Alzagu Chokkan, and Chokkanathan along with His consort Meenakshi, AngaiyaRkaNNi.
Just to the northern aspect of the SriSundaresvarar shrine, there is 'VeLLiyamabalam'.
This is the shrine of Nataraja performing the Cosmic Dance. The Dancing Nataraja is said to perform his Cosmic Dance in five places. They are known as the 'Sabha's or 'ambalams. The sabha at Chidhambaram is the Golden Sabha or 'Pon Ambalam'. Madurai is the 'Silver Sabha' - 'VeLLi Ampalam' or 'Rajitha Sabha'.
The Nataraja here, is known as 'athira viisi aaduvaar'.
Normally, the Dancing Nataraja stands on his right leg and throws across the left leg.
According to the ThiruviLaiyaadal puraaNam, there was a Pandya king called Rajasekara Pandyan who was grief-striken because of this. He felt that Nataraja has been standing on his right leg for eons of time. He prayed ardently to Nataraja to shift his stance and change his posture. He wanted to Nataraja to stand on His left leg and lift up and throw across His right leg.
For that he performed many austerities, pujais, penances. If Nataraja did not comply, he pledged that he would fix his 'surigai' sword on the ground and fall over it and impale himself thus.
At one point of time, he decided to kill himself and prepared for that.
Immediately Nataraja appeared and hearing the Pandya's plea, shifted his legs. He stood on his left leg and lifted his right leg and danced thus. 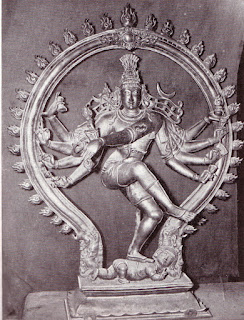 This is known as 'Kaal maaRi aadiya patalam' among the 64 ThiruviLaiyaadal's - 64 Divine Sports of SriChockanatha Peruman of Madurai.
This one of the most dynamic and beautiful parts of the ThiruviLaiyaadal Puranam.
The Nataraja here is ten-armed. He is a very dynamic and versatile figure as depicted by ThiruviLaiyaadal puraaNam.
The shrine of Nataraja in the VeLLi Ambalam faces south.
VeLLi Ambalam is a very powerful node of Cosmic Power. The power gets enhanced with the performance of Manthra recitation and prayers. The overflow of power takes place once in a while in regular intervals. This outsurge of the Cosmic Energy may take the form of certain manifestations . Usually it would be in the form of fire. Certain areas used to catch fire because of the outsurge of  Cosmic Energy. This was known as the 'Paarvai'.
This was solved when they built a wall and closed the doorway and housed the MukkuRuNi PiLLaiyar there.
VeLLi Amabalam is covered totally with silver pltes. Lord Natara's statue is larger than life-size. It is adorned with gold and silver kavacam and ornaments.
His festivals are aavaNi muulam and aadi muLaikkattu festivals.
In those days, free food was given to thousands of people on these days. Maravarman Sundara Pandiyan I has made thEr chariots for Nataraja. ThEr festival was in the month of panguni.
ThEr stand had been built by Dalavaay Ariyanatha Mudhaliyar, the de facto founder of Madurai nayak kingdom. Thiruvempavai was recited in the month of Maargalzi.
I have uploaded two photos from the Photos section of Agathiyar.
One is the normal Cosmic Dance. The other is the Left Shift.
You can compare both.
FROM THE THIRUVILAYADAL PURANAM OF MADURAI
Posted by JayBee at 01:47 1 comments 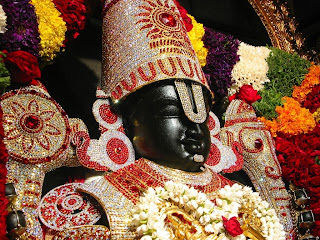 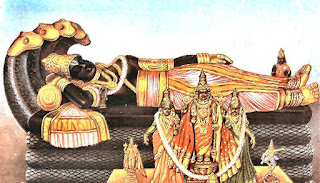 There was this wrestler called 'uRangga villi dhaasan'.
'uRanggavillai' is one of the titles of Lakshmanan.
'Sundaravilli' is the elder brother.
Our dhaasan was obsessive and passionate about
his wife to whom he was very very much attached.
One day, Ramanuja asked him why he was so much
attached to his wife.
uRanggavilli told him that it was ther astounding
beauty; especially those breath-taking eyes which
were totally captivating.
So Ramanuja threw a challenge to him:
"If I showed you a pair of eyes which are more
captivating than your wife's eyes, would you discard
that obsession?"
"If you can show them....", scoffed our friend.
Ramanuja asked him to follow and took him straight
to the sanctum sanctorum of Thiruvarangganathan.
He pointed.
uRanggavilli dhaasan saw....
Those eyes......
Beyond any description.
Nor comparison.
Thus uRanggavilli dhaasan lost himself and became
a monumental model of the prabhathi margam that
Ramanuja was striving to show the world.
Well.....

Such were the eyes.